The most common request we receive is that of a production wishing to film inside an airliner. Be that a long haul aircraft, short haul, Economy, Business, First Class or maybe even the cockpit. A scene with complex dialogue or merely the heros wistful glance through the window they historically represented a greater challenge, and took more planning to achieve, than some flying stunt sequences we’ve managed.

It’s not very upbeat but let’s start with the problems.

A modern airliner, even a modest one like a Boeing 737 (think your last Easyjet trip) represent an investment of about $90m each, something like a Boeing 747 will be closer to $300m. The owners have to make them sweat to get their money back. The statistic I’ve heard is that a 747 operating at 85% capacity must be airborne for an average of 18 hours per day to break even. It’s big money all the way. So if you want to steal one away and shoot it then the operator will be expecting to be compensated for all that lost revenue. It’ll be expensive.

The further trouble with airliners is that, unlike a little Cessna and it’s friendly grass runway home, they operate out of ‘proper’ airports. They need long runways and extensive ground handling infrastructure from all the steps and trucks to the engineering support, ground power and access to large fuel reserves. Because they carry passengers there will be security and trying to get a film crew ‘live side’ (the aircraft movement area) is littered with complications and restrictions. 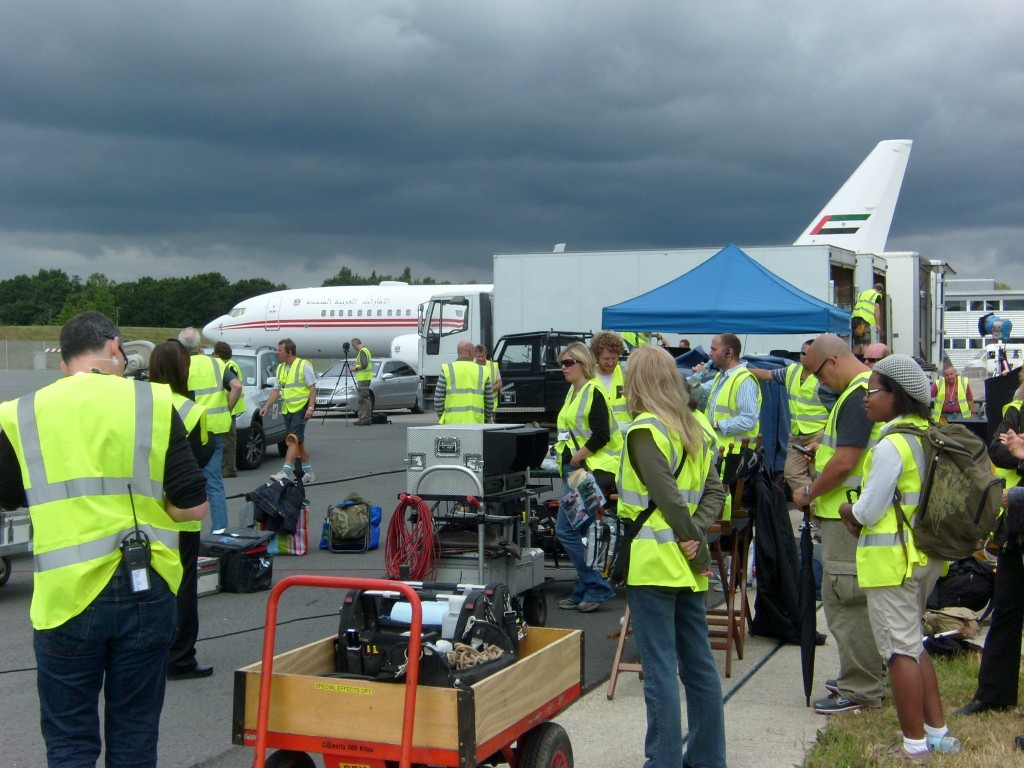 For a start, your vehicles. All your trucks and production vehicles won’t be insured to operate ‘live side’, and in some cases your drivers not qualified to drive them even if they were. It’s a restriction written into the small print in almost all motor insurance policies, and with the opportunity to reverse into an $300m asset I guess we can’t blame them. So you’ll either need to have your vehicles insurance uplifted or accept that you’ll have to cut a deal with an airside operator and decanter all your equipment into one of their vehicles for the last 500m of the journey. Obviously it’s not always even possible with some of the bespoke vehicles we’re used to.

It’s not much easier on your crew. For security a major UK airport recently wanted copies of passports for all crew attending 48 hours in advance. The last time we did it we had to accept 1 airport chaperone per 5 crew members. If one of you wanted a pee you all had to trot off and wait outside. If you wanted to travel back to base then you needed an airport car to take you. You hop in, wait while the driver contacts Air Traffic Control for permission to cross any active movement areas and then zip off at 20 mph. Do it all again to get back. Its really slow and painful. 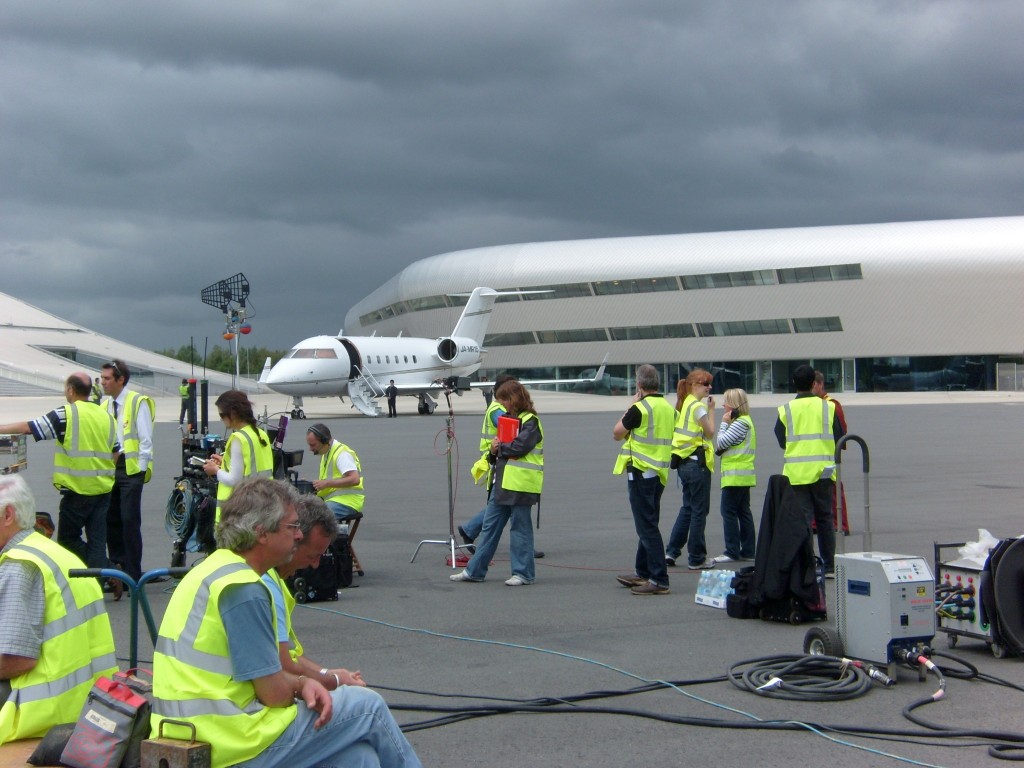 Now for actually filming on an airliner..

Most airliners are really not ideal being so small and cramped. You’ve struggled to get down an aisle with a small wheely case, so fancy trying it with kit. They are also difficult to light. Outside you’ll need HMI’s on cherry pickers to lift them to window height. Inside there is nothing really to attach a light to, so you start trying magic arms off the lockers, bit of tape here, wedge it there. Every operator will require a minder there to stop you from breaking their aircraft and typically they are very cautious. It’s much easier to say ‘no’ if they’re in doubt, and they will be in doubt as they’ve likely never done it before. Technically it can be very frustrating.

Sound sensitive? The airport will be large enough that stopping other aircraft from moving or taking off in the background will be impossible. You just have to shoot around it.

You want to remove seats for camera access? Well that will require a licenced aircraft engineer and yet more expense. And if you break something? Well we busted an overhead air nozzle once, you know those poxy little plastic twisty air vents. The replacement part was £285, fitting another £300. Then we heard of the production that put a 3 inch rip in the upper suede headlining of a big private jet. To replace the whole lot so it matched perfectly – £52,000. Eeeeek.

And that’s just the cabin. If you’ve got scenes in the cockpit then you’ll really understand cramped. No you can’t remove the windshields to shoot your hero head on so you’ll be forced into a small static camera you might not want. Also you won’t just be able to wiggle the controls at your leisure, many will be locked off while the aircraft is dormant and without power. Remember the air nozzle? Heaven forbid you break something up front..

So what’s the solution?

Some larger productions decided that the only way forward was to build a cabin mockup specifically designed with filming in mind. As a result we now have several airliner cabin options ready to film on at either our location or yours.

Now I’ll let you into a secret, we’re not the exclusive owners of such mock ups. Here in the UK some of the major airlines have crew training facilities with really nice cabin interiors. Some still have the security restrictions that come with being on airport, passports 48 hours in advance etc etc. However the real downsides are availability and workability.

The cabins are being used to train their service crew so are pretty much in use most days 8 til 6. You’ll find the odd day available but most likely you’ll be looking at a night shoot to get on it. If you need to build anything or dress the cabin then you’ll have to strike it at the end of each session, clear out and release it to their training and then reinstall it next evening.

Then all the downsides of the real aircraft are merely replicated on the mock up. Space is tight, seats are fixed, again you’ll struggle with camera and lighting. Some of them don’t actually have windows so you’ll be forced into either putting all the blinds down or doing something clever (expensive) in post.

Last but not least, they’re more expensive than us!

Our airliner cabin options for filming. 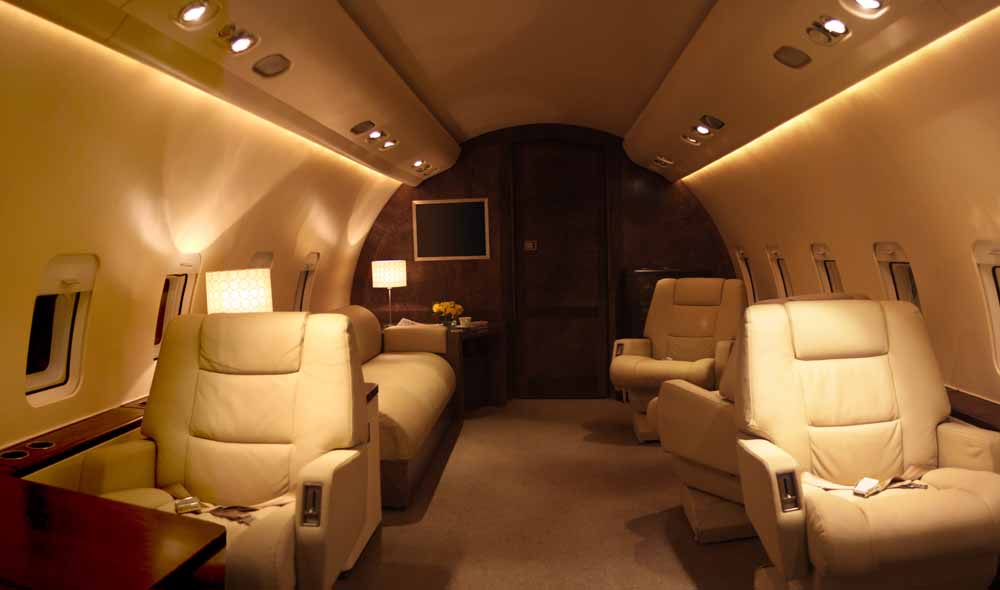 Our interior is based on the Challenger Jet, a luxury 9 seat intercontinental business jet. It’s actually built 15% oversized and comes with all the luxury you’d expect from the real thing. However the advantages over the real thing are many. The walls are made up from 14 individual panels each, or all, of which can be removed in seconds to allow camera access. The roof is made up of 7 similar panels that again can be removed for lighting access. The chairs can also be removed in seconds, they also track fore and aft, swivel and recline just like the real thing, well, because they are the real thing. It sits on a stage with access to green rooms, toilets and a kitchen and although I’ll be grumpy if you break it you won’t be dancing with £50,000 bills. If you need to shoot the real thing on the ground then we have access to a couple of real examples at good value.

For more information and images go to: http://www.shootaviation.co.uk/in-the-studio/private-vip-jet/ 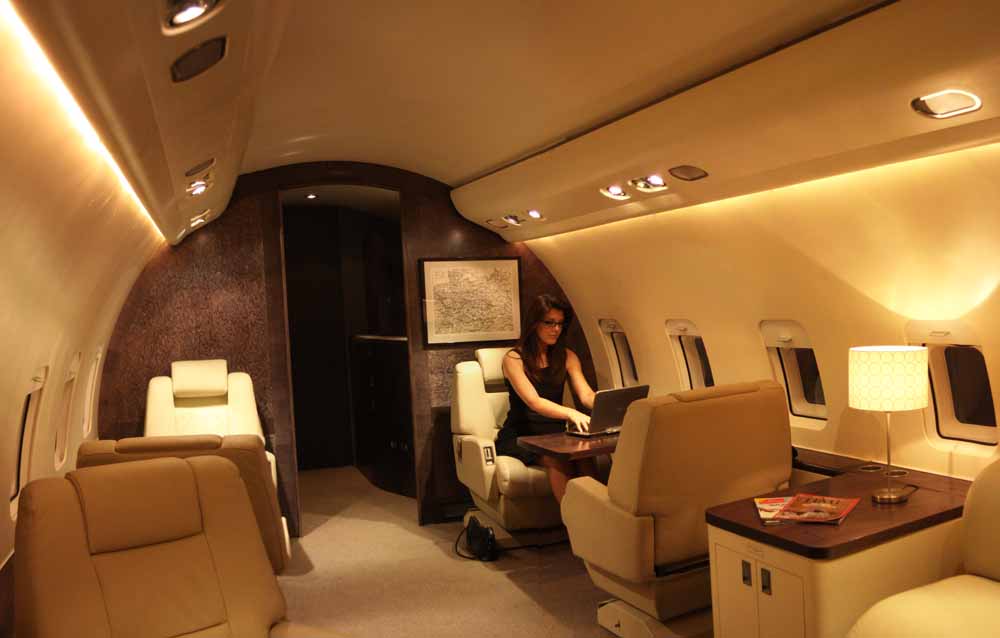 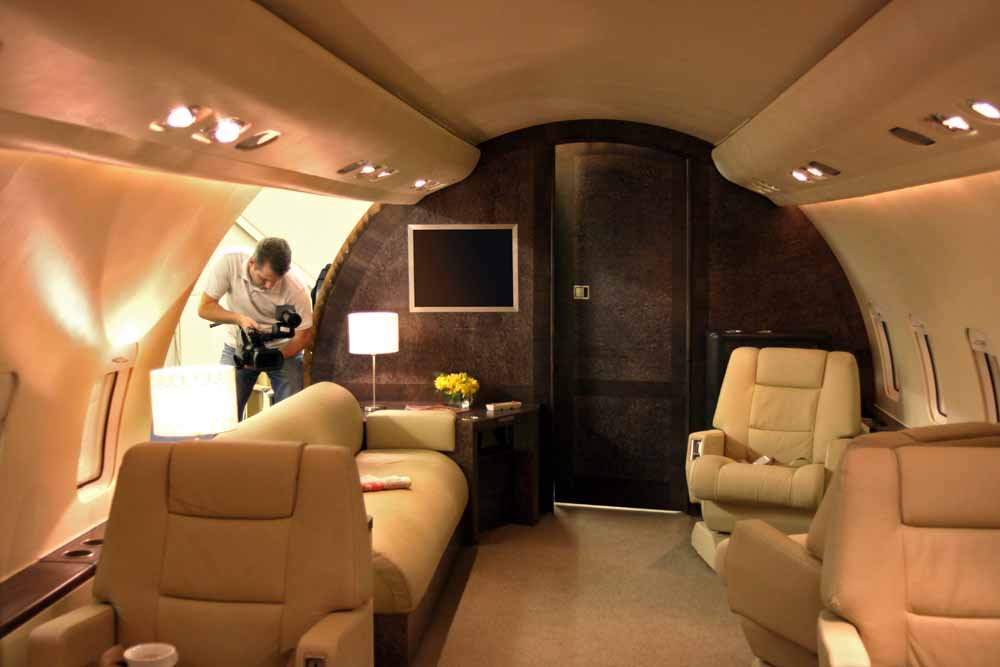 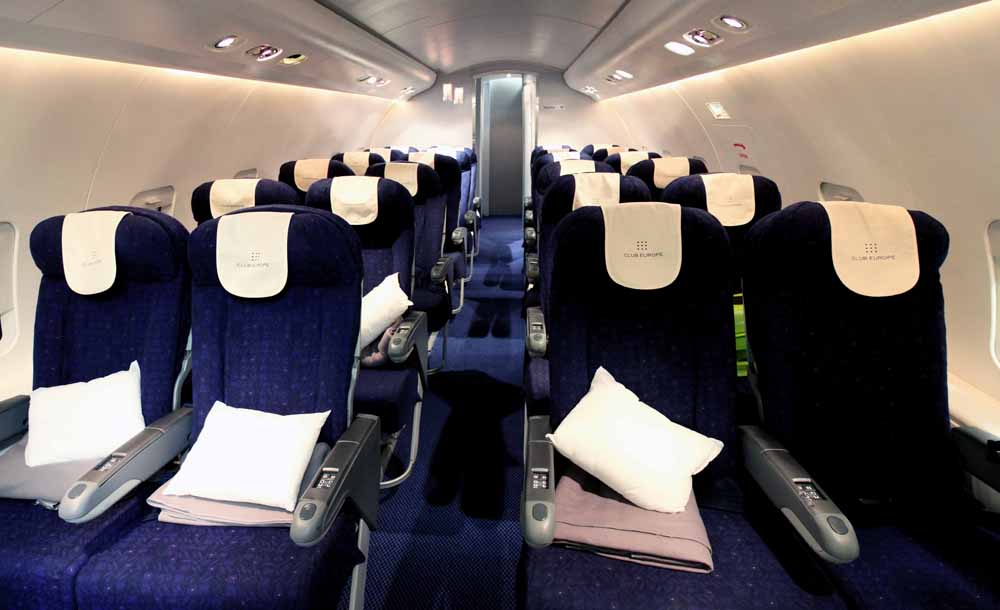 Basically it’s the shell of the Private Jet, with all the same benefits of the camera / lighting access but with the luxury interior removed and replaced with 24 airline seats. Again these seats are the real thing but modified to fit onto quick release rails so as the camera moves around the cabin we can have rows in and out in seconds. The back of each seat has provision for an in flight screen. We have various inserts from blanks, to greens, to moving map displays. 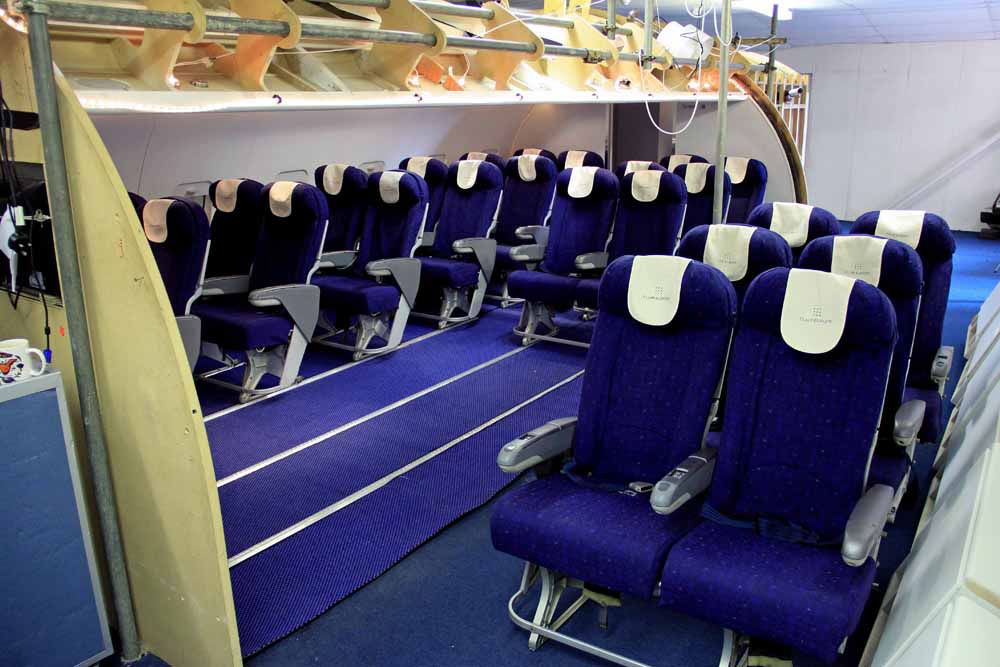 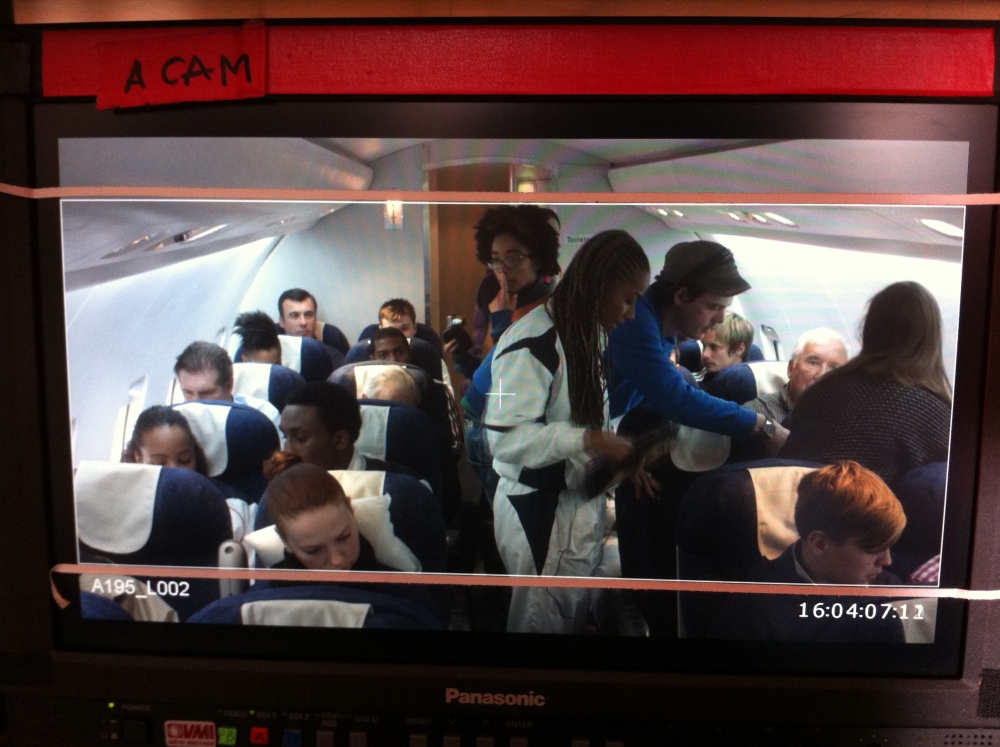 Originally built for a big budget commercial this replicates the interior of a Boeing 737 / Airbus A320. It offers genuine airliner seating in a ’3 / aisle / 3’ layout. Again the seat backs have all the same screen options as the Commuter Jet, and again all the same flexibility for camera / lighting. We can build it as a 10 row complete cabin or for the cheapest option let you take a small one sided cabin section. If you’re just going close on someone in a seat then its by far the cheapest way of shooting in an airliner.

Finally, a real 747! Yep, the real thing. It has a three class layout with economy, business and a first class. The cockpit remains largely intact. Although you’re back to some of the restrictions of filming on a real aircraft don’t underestimate just how big the 747 is. We’ve removed sections of seating so you can have video village in there with you. It’s an option that’s definitely worth a look. 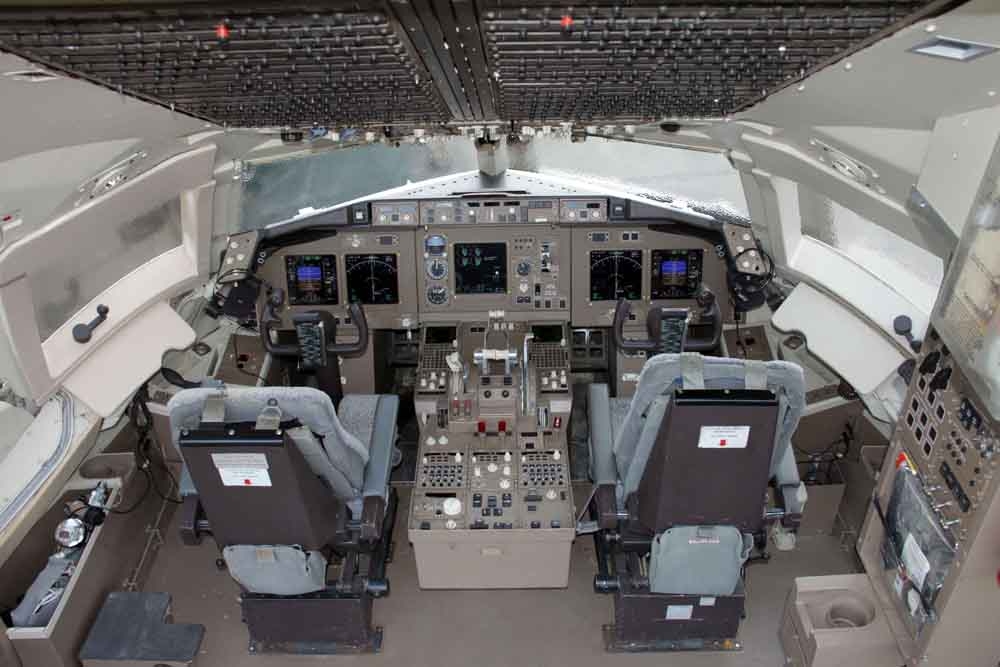 As well as the 747 we also have the most amazing mock up of a modern Boeing Airliner cockpit. Built at six figure expense for a major Hollywood blockbuster it’s all you’d ever want. The complete rear cockpit wall can be removed for camera access as can the front and side windshields for those face on hero shots. The controls can be wiggled, the knobs can be twiddled, and if it’s a night shot you’re thinking of then it also all lights up! I don’t think there is anything else like it out there. http://www.shootaviation.co.uk/in-the-studio/boeing-airliner-cockpit/. 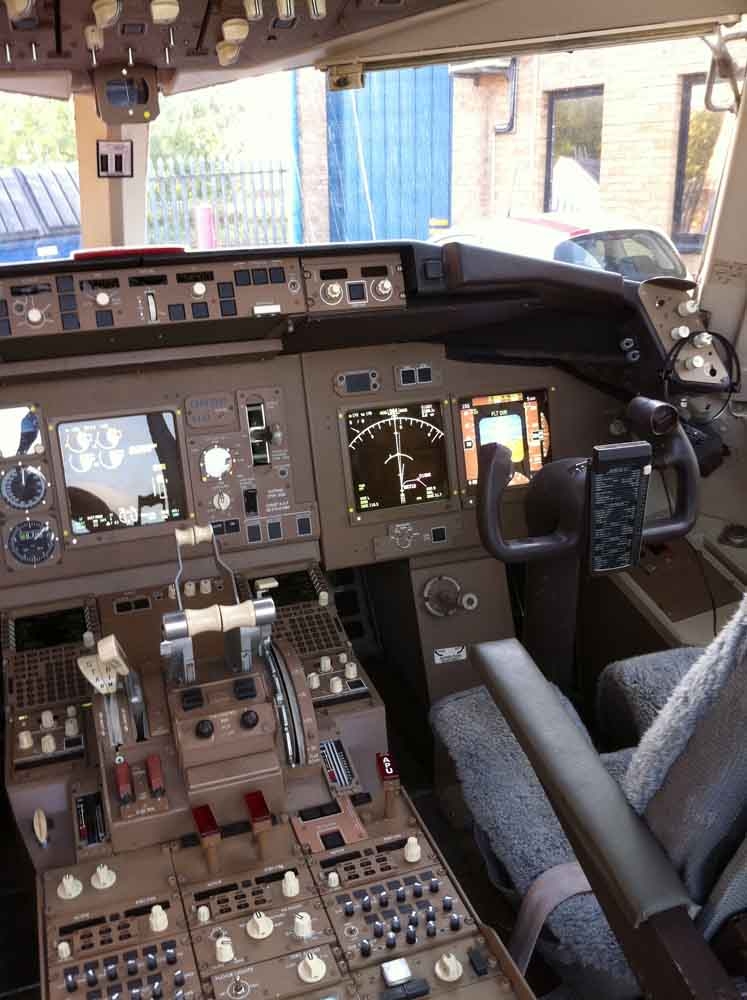 If you’re looking to build your own interior then we can also help. We have a huge quantity of seating from economy to First Class, carpets and seat rails. We have original interior side panels and overhead lockers you can either rent or take a squeeze from to make your own. If you make a good enough job we’ll also likely be a buyer of it when you’re done.

I hope this article has been of use, any other questions then please don’t hesitate to call for a chat. I really hope we’ll be able to help..